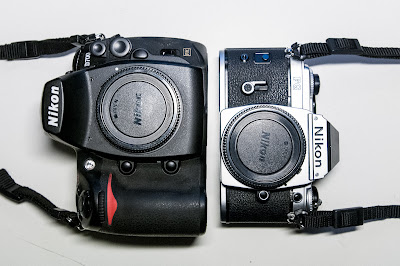 The above picture illustrate what I think is wrong with the camera development today.
The right one is my trusty Nikon FG, a semi-pro (fullframe) film camera introduced in 1982, discontinued in 1986. It is 420g and 139x86x53mm. To the left is a Nikon D700, a camera I’m considering buying second hand, a pro digital fullframe camera introdused in 2008, expected to be discontinued this year. It is 995g and 147x123x77mm.

Some quick calculating tells us the D700 is 120% larger in volume and 140% heavier then the FG, although they are both fullframe, use the same lens-mount, and is directed at roughly the same user segment.

Now can we, for arguments sake, agree that size matters. Soem photographers like to run into a crowd, scream “Power!!” and firing away at 12 fps., but I think most people, at least amateurs, long for smaller cameras. Working in a camera outlet I often hear people argue they want a smaller, more handy camera then their DLSR to bring on holidays and sunday walks. When the camera is smaller, lighter, slips into a coat pocket and delivers just as good quality,  it is used more, and it gives the user better picture. When trying to blend into a crowd to shoot, a smaller camera attracts less attention. When shooting for days straight it doesn’t ruin your hands and joints. So why oh why have the camera producers been so keen to put out DSLRs that are massive compared to its film equivalents? Small cameras are now regarded as the Electronic Viewfinder Interchangeable Lens (EVIL) cameras, being released with exclusive mounts (Nikon 1, micro 4/3 etc.) and small sensors, not necessarily appealing to professionals (although there are happy exceptions)

What I would love to see is a full frame F-mount DSLR with meter, autofocus and preview-screen, all the things you expect in 2012, but fit into the same size and weight of a Nikon FG equivalent.

Note: The recently released D800 is starting to hit the market 100g lighter than the D700. Thank you Nikon, more of that please!